Pardon the mess.  Big changes are in progress!

How to Address Your Wedding Invitations

In a world of email and text messages, we don’t often send out formal mail to family and friends.  When it comes to mailing out your wedding invitations, chances are you’ve got a few households that have you stumped on how best to address the envelopes.  Maybe your cousin has a plus 1 that you don’t really know or your your Aunt is a doctor but your uncle is not.  All these situations can be tricky and with all the time and effort that went into creating your wedding invitations, getting those lovely envelopes addresses properly is the final icing on the cake so today we are sharing our ultimate guide to addressing your wedding invitation envelopes.

Envelope Addressing for a Married Couple 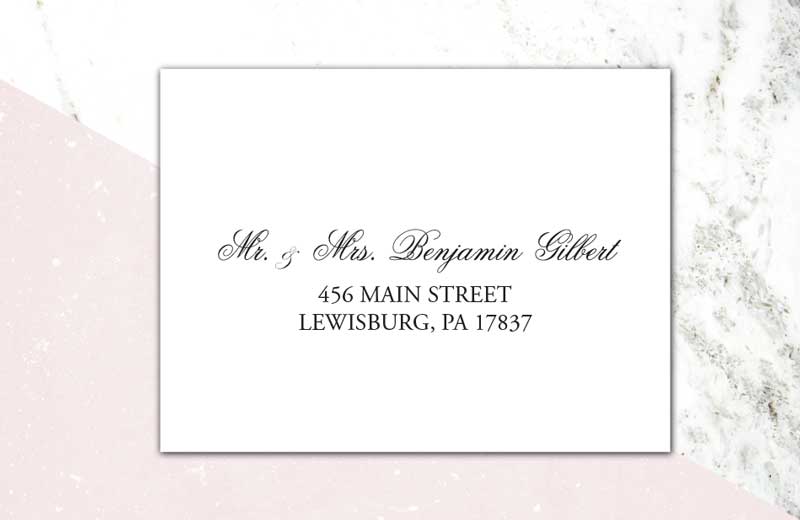 The most traditional form of addressing an invitation. You may also wish to include both person’s names instead to read “Mr. Benjamin and Mrs. Rebecca Gilbert”.  If you are using an inner and outer envelope, the outer envelope should be addressed as shown above.  For the inner envelope you may choose either “Mr. and Mrs. Gilbert” for a formal invitation, of “Benjamin and Rebecca” for a more modern or casual invitation.

Envelope Addressing for a Married Couple with Different Last Names 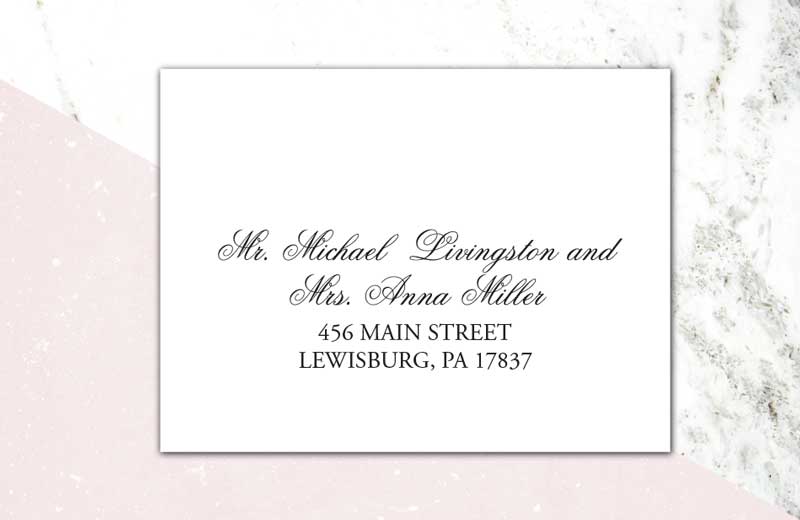 It is appropriate to list the person to whom you are the closest with first. This is true for both outer and inner envelopes if you are using them. If you know each person equally as well you may list them in alphabetical order or as you wish. 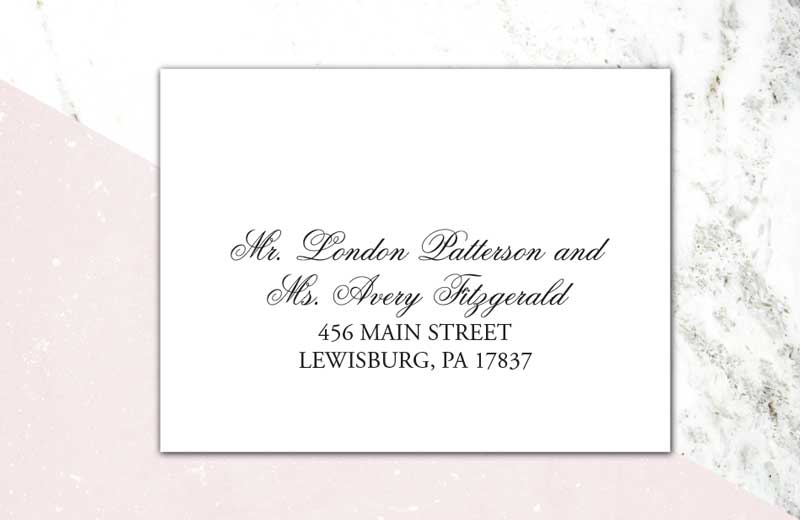 Both names should be included on the envelope and you can treat the names the same way you would for a married couple with the first name being that of the person you are closest with or your choice if you know them equally.

Use the same rules you would for any other unmarried or married couple. If the couple is married, list the names on the same line. 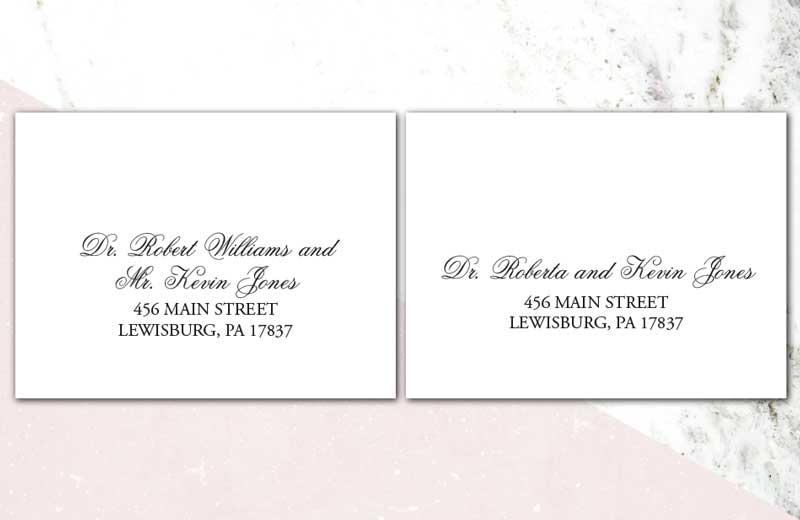 If only one person in the couple has a distinguished title, it is proper to put his/her name and title first. If the wife has the professional title and uses her maiden name professionally, you should address her as such. 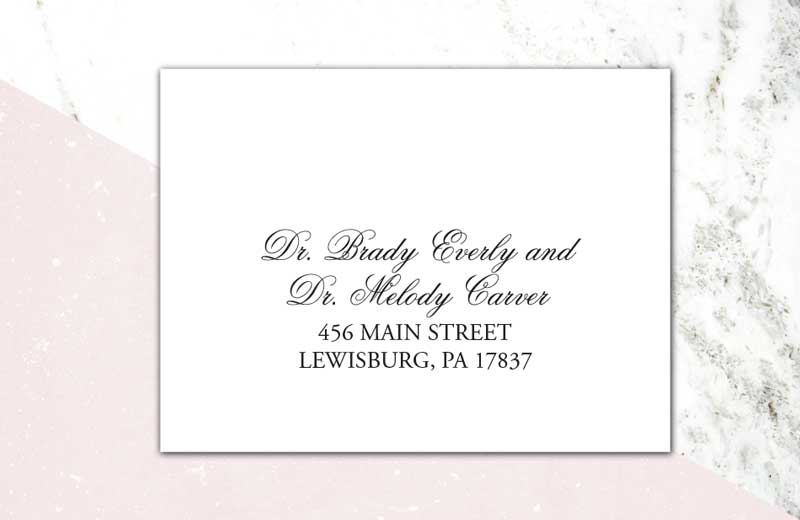 If both people in the couple have professional titles and have different last names, both of their names should be written. 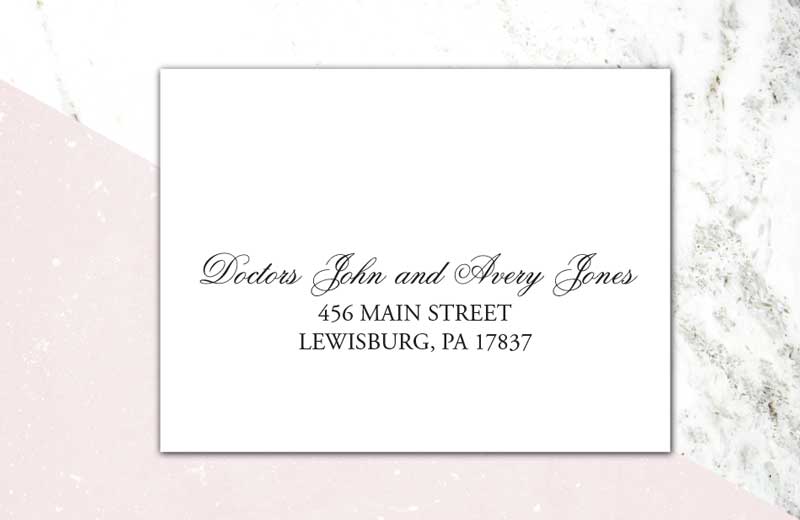 If both people in the couple are professionals and have the same last name, you may address them as shown above or “The Doctors Jones” would also be acceptable.  Many of the same rules as Doctors apply to military personnel, reverends, judges, etc. If both parties have distinguished names, it is best to put the person with the highest rank first. Also, it is best to include “The Honorable” in front of any title for an elected government position excluding the President.

Envelope Addressing to a Divorced Woman 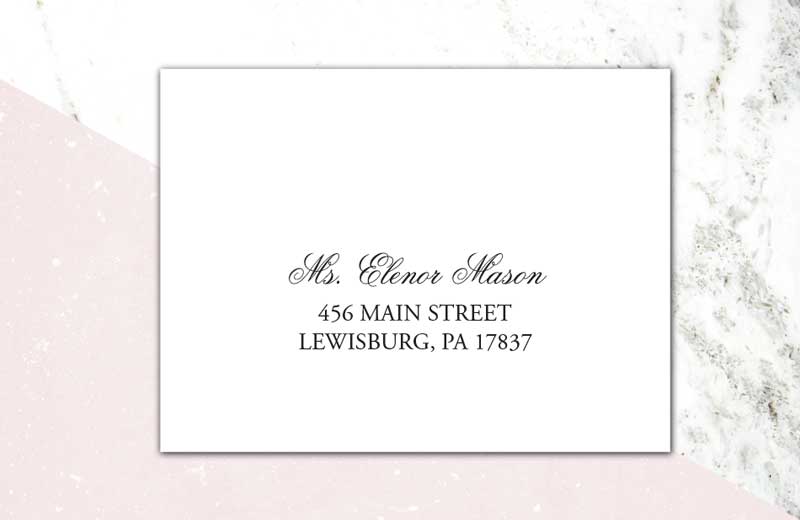 The best practice is to address her as either Mrs. or Ms. and use her maiden name if she no longer uses her former husband’s surname.

Envelope Addressing to a Widow 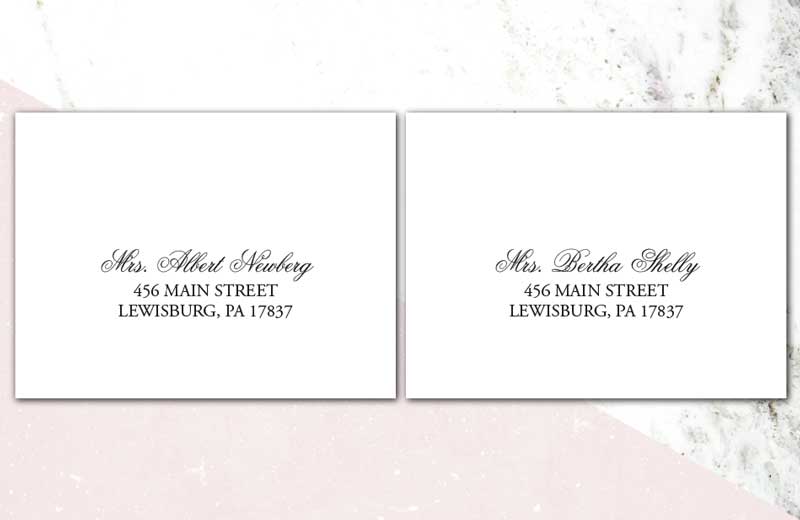 Traditionally, you would use the deceased husband’s last name in the address, as well as his first name. However, this depends greatly on her personal preference and what she will find respectful. Some choose to use their own first name, and sometimes they also may use their own last name. If you are unsure, it is always best to ask the person before mailing her invitation.

Envelope Addressing to Families with Children 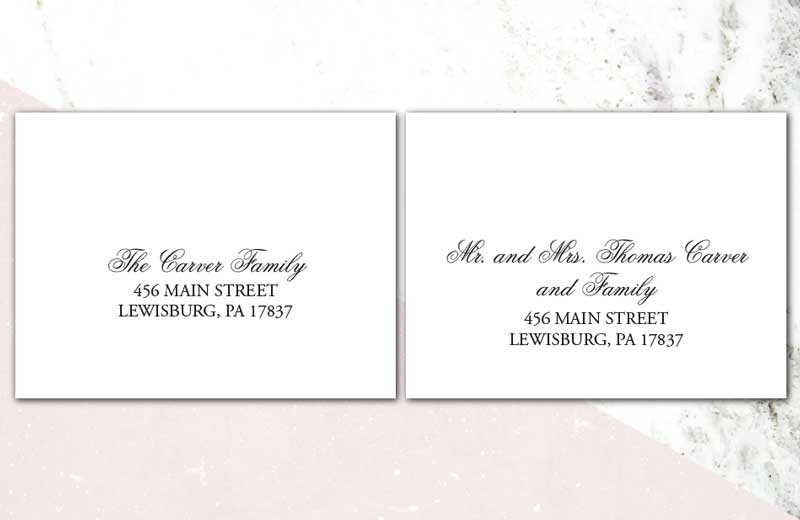 If you are using an inner and outer envelope, traditionally children are not listed on the outer envelope but may be listed by name on the inner envelope. Remember girls under 18 should be addressed as “Miss”. Boys do not require a title until they are 18.

For single envelopes (the more modern approach) you may address the envelopes to the family or list the children individually.

Envelope Addressing to Children over 18 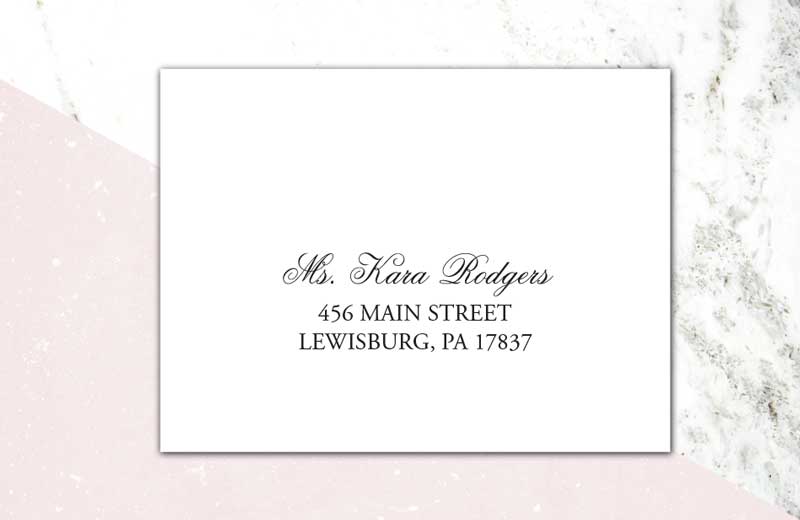 Children over 18 that no longer live at home should receive their own invitation. If they still live with their parents, they may be included with their family’s invitation. Also, be sure to include “and guest” if you welcome the single people to bring someone with them. 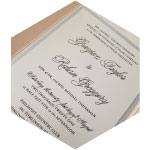 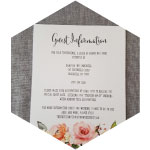 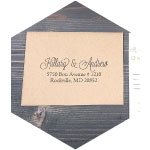 From formal to casual, find the perfect way to word your invitations.

Whether you need a simple reception card, provide your guest hotel accommodations, directions or provide your wedding website, find easy ways to word all your enclosure cards.

Easily see how to address your wedding invitations for all those tricky situations. 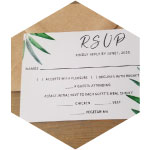 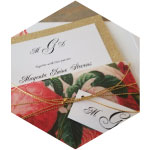 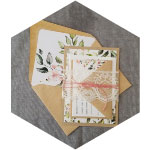 From meal choices to song requests, find all the elements to word your perfect RSVP card wording.

All the dos and don’ts so your wedding invitations are perfect from start to finish.

Perfectly assemble your wedding invitations so they arrive to your guests just right.

We are not currently scheduling
in-person appointments.